U.S. Military Members stationed in the Far East can enter for the chance to win round-trip airline vouchers to fly a friend or family member to visit.

From now until March 1, 2016, military members stationed or deployed in the Far East (Pacific Rim) region can enter the Military AutoSource “Fly a Friend” giveaway, sponsored by Nissan. The winner of the giveaway will receive Delta airline vouchers, valued at $2,500, to fly a friend or family member of their choosing to visit. Eligible military members can enter for their chance to win by visiting  www.militaryautosource.com/FlyaFriend/.

The “Fly a Friend” giveaway aims to give overseas military members something they rarely get, the 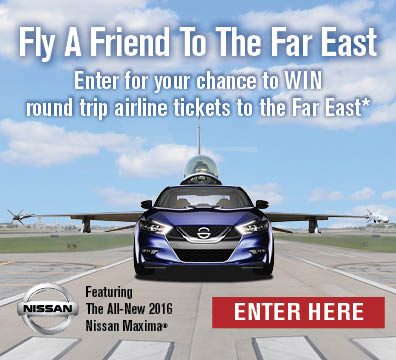 opportunity to see a hometown friend or family member during their deployment. Military AutoSource is excited to work with Nissan to give one military member the chance to fly a friend to visit them at their duty station. This giveaway is one of many sweepstakes and contests that Military AutoSource hosts throughout the year to give back to the military community they serve.

“It is not only a corporate but a moral and humbling responsibility to give back to those who secure our safety and freedom.” Said James Krulder, Director at Military AutoSource. “We’re excited to give one lucky service member a great experience being able to fly a friend to visit them overseas.”

Military AutoSource’s “Fly a Friend” giveaway was created in celebration of the launch of the all-new, fighter-jet-inspired, 2016 Nissan Maxima. The designers at Nissan sought inspiration in the cockpit design of a jet after a visit with the U.S. Navy’s Blue Angels ®. The fighter-jet style is apparent in the floating roof and deeply sculpted character lines in the design of the Maxima.

To qualify for a chance to win, you must be located in the Far East (Pacific Rim) and be a member of the U.S. Military or civilian component (DOD or government contractor) on active duty, or member of the diplomatic community. For full “Fly a Friend” details and official giveaway rules, visit: www.militaryautosource.com/flyafriend.

Military AutoSource (MAS) is a subsidiary of the Overseas Military Sales Corporation (OMSC). For over 50 years, Military AutoSource has been serving the military community by providing U.S. specification automobiles to active duty military, civilian, DOD employees and the diplomatic community stationed outside the United States. The on-base division of Military AutoSource, formerly known as Exchange New Car Sales, is authorized by the AAFES/NEXCOM program. You can learn more about Military AutoSource at www.militaryautosource.com.