Direct injection, diesel and turbocharging are the latest buzzwords in engine technology.

For 20 years, Ward’s Auto has been assessing which engines rule the roost at the start of each new year. 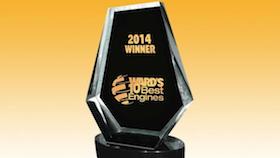 To qualify, the engine in question has to be in a vehicle you can buy in the first quarter of the year — and that vehicle can’t cost more than $60,000. It’s no surprise that the idea of downsizing has taken center stage for the 2014 edition of Ward’s 10 Best Engines. The ever omnipresent need to meet more stringent emissions and gas mileage standards worldwide has caused all but a select few manufacturers to turn to the trend. And as you, our savvy reader, are probably already aware, turbocharging is the most logical way to downsize — especially when paired with direct injection.

Modern turbochargers have a very minimal effect on vehicle refinement, while offering in most cases more torque across the rev range than their naturally aspirated, bigger breathing forbears. Due to the smaller size of most turbocharged engines, they also consume less fuel.

But as logical as turbocharging is in gasoline engines, it makes even more sense when you boost modern diesel engines, which offer ridiculous fuel economy, gobs of torque and a very clean footprint on the environment. And we haven’t touched on the ability of a stout iron diesel engine block to keep going and going and going. But enough from us – let’s have a look at Ward’s engine choices for the 2014 model year.

1. The 3.0-liter, supercharged engine found in the Audi S4 and S5. We couldn’t agree more. Audi made it on the list last year with this engine, and there’s plenty of reason for a repeat. The direct-injected 90-degree V6 cranks out 333 horsepower and 325 lb-ft of torque, and thanks to a roots-type supercharger, it seems to do so over an absurdly broad rpm range. In the S5, it still manages an Environmental Protection Agency-estimated 17 city mpg/26 highway mpg while sending you rocketing down the road. The intercooler setup couldn’t be more innovative, and the always-there oomph renders the car’s V8 predecessor completely irrelevant.

8. Just as you wouldn’t expect a pushrod engine to make a best-of list in 2014, neither would you expect a single-overhead cam engine without direct injection — or, gasp, a turbocharger! But as it has for many years before, Ward’s praised the 3.5-liter V6 of the 2014 Honda Accord, noting an impressive 34 mpg in highway driving and the decidedly counterculture approach to delivering those figures. The Accord V6 makes 278 horsepower and 252 lb-ft of torque.

10. Volkswagen makes this year’s 10-best list with the 1.8-liter turbocharged inline-4 offered in the Jetta, with editors saying that the new engine was “quiet, efficient and a riot to drive in sport mode, happily popping off the line even with a 6-speed automatic transmission. Several editors logged close to 30 mpg in mixed driving, and the EPA says 36 mpg is possible on the highway.”