Thousands of Volkswagen vehicles are currently en route to Sochi and the Winter Olympics. The company is the official car sponsor and will provide 3,000+ vehicles.

“The vehicles will be used by thousands of athletes before and during the Olympics,” a press release stated.

The Volkswagen Amarok “monster truck” pictured above will likely be on site, too. It was built last year to promote the Olympics during a trans-Russia journey dubbed the Amarok Polar Expedition. The expedition vehicles are made for routes off the beaten path and find their way even where there are no roads. 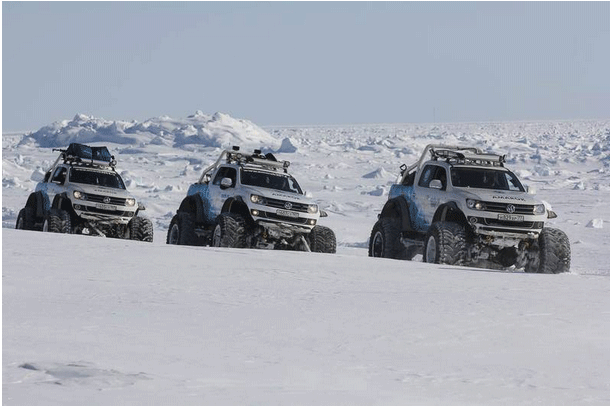 The trucks definitely took the long way to the Olympics — the Amarok Polar Expedition brought Olympic spirit in the Russian Far East through an unprecedented 10,000-mile trip in 2013. The expedition claims to have been the longest trip in one-direction through Russia ever.

The trip took 60 days and was meant to promote the Olympics in remote corners of the country and bring back images and video of the people met along the way.

Learn More About Volkswagen at www.militaryautosource.com