The Audi R8 won 2016 World Performance Car in the World Car Awards that took place at the New York Auto Show in March. 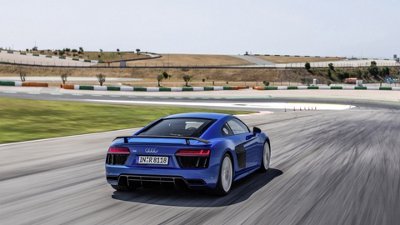 This is the fourth win for the Audi R8 in the World Car Awards, making it the most successful model in the history of the World Car Awards. What makes the coupe a winner? The R8 offers an extraordinary driving experience with its V10 mid-engine and quattro drive. In fact, the coupe offers more performance than any other Audi production model.

“With its distinctive design, its driving dynamics and its closeness to racing, the R8 is one of the strongest calling cards for the four rings and is the flagship car from Audi Sport. The first generation of the R8 paved our way toward becoming a premium brand and raised the aura of Audi to a new level. The new R8 will continue this success story and further accelerate the growth strategy of Audi Sport,” said Dietmar Voggenreiter, Board Member for Sales and Marketing at AUDI AG.

The Audi R8 was built using the winning knowledge of the Audi brand in auto racing; the sport prototypes won the 24 hours of Le Mans, the FIA World Endurance Championship, 13 times since 2009.

Take this winner home! Get exclusive U.S. Military pricing on the Audi R8 when you order through Military AutoSource.